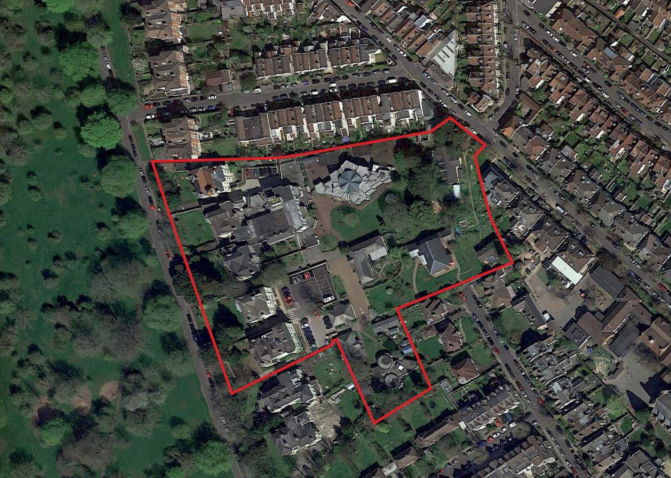 The Former St Christopher’s Site
A planning application for the development of the St. Christopher's site was registered with Bristol City Council in mid March 2022.  The Community Association are opposing the application on a number of grounds, most notably the overdevelopment of the site with large apartment buildings up to six storeys high being proposed on the backland area of the site. We are also opposing it on parking grounds as the number of parking spaces proposed could lead to overspill parking on surrounding roads.

The planning application can be found at :-
https://pa.bristol.gov.uk/online-applications/applicationDetails.do?keyVal=R8HHLODN0DG00&activeTab=summary

Summary of the Proposals
The overall proposed is for an ‘Extra Care’ development for people over 70 who are basically fit and active but who need some on-site care and support each week. (NB. This is not ‘Sheltered Housing’ nor is it a ‘Care Home’; it fits between these, and Westbury Park does not currently have an Extra Care facility.)

The main components of the project are:
The Development Masterplan shows :-
Key Issues

Overdevelopment: too much building, too high, too close to neighbours. And that overdevelopment has negative impacts –
(a) in heritage terms on our area and on The Downs (the site and its surrounds are in The Downs Conservation Area),
(b) on the setting of the Grade II listed Grace House (dramatically overwhelmed by 6, 5 and 4 storey buildings very near it),
(c) on the privacy and outlook of neighbouring houses and
(d) on the serious loss of trees in the highly significant ‘copse’ visible from the corner of Bayswater Avenue and St. Helena Road. (Well, visible now but try to find it on the image above!)

The Risk of Overspill Parking. The evidence we and SCAN are compiling strongly suggests that 65 spaces will not be enough and that would lead to significant overspill onto surrounding streets, with related traffic problems. This is another aspect on which an objection would carry real weight. And if there is overspill parking, then there are concerns about pedestrian gates onto The Glen and Bayswater Road, making it easy for people to park then nip into the development. Objections on that would carry weight (but be aware that this would not apply so much if enough parking was provided.)

Traffic. Objections about traffic generally into/from the Westbury Park entrance/exit would carry little weight because it is likely to be less than when St. Christopher’s was fully operational. But objections about vehicle access at the Bayswater Avenue corner (if only for four residents’ cars) would be worth doing.

Ecology, biodiversity and wildlife. The tree loss in the site corner (above) is part of the overdevelopment issue but many trees all across the site will be removed and – the developers say – replaced. But, again, there is poor and unconvincing evidence about that and all other aspects of ecology, including the site’s role as a wildlife corridor. An objection on these issues now carries more weight with a legal requirement for a ‘net gain’ in biodiversity.

Other possible objections could be about no affordable homes, the loss of special needs provision, too many care homes already etc. But, if you choose to object, be aware that these issues may not be given much weight.

We have also submitted a statement on the community engagement process.

Update - 17th October 2022
There were over 700 objections to the planning application and a number of City Council officers / teams also expressed major concerns to the point where the application was likely to be refused were the Council minded to make a decision. Objections have been made to the St. Christopher’s application including objections from Bristol North West MP Darren Jones, local councillors, Bristol Civic Society, Historic England and The Tree Forum.  Quite late in the day the Council’s Transport Development Management Team also commented, saying that the application failed to demonstrate that pedestrians, cyclists and motorists can safely access and move around the site and concluded that “If the applicant is not willing to withdraw the application then it must be refused on the grounds that it would be detrimental to highway safety”.

At the time of writing (October 17th) there are a number of possibilities including the developers making significant revisions to the application or submitting a new application. It is also believed that the Council and the applicant may decide to agree a Planning Performance Agreement (PPA) - a process for progressing the application through discussions and negotiations between the developer and the Council (without prejudice to the decision eventually made by the Council on the application). It is not yet clear whether there will be further community consultation on the evolving proposals or what form this would take.

The Community Association and the St. Christopher’s Action Network (SCAN) remain in close contact with the case officer and are monitoring the situation closely.

This is the third application submitted by the nursing home owner in recent years – the previous applications having been refused both by the City Council and on appeal by the planning inspector.

What counts as permitted development has been extended in recent years, including in one area where there has been concern expressed by many living in Westbury Park – house extensions. The new regulations allow larger side and rear extensions to be built without requiring planning permission (e.g. up to three metres high at the eaves if the proposed extension is within two metres of a property boundary and, in the case of terraced houses, up to three metres beyond the rear wall of the original house). The changes may be welcomed by those wishing to extend their properties but there will often be downsides – the negative impacts on neighbours (loss of light, greater enclosure), neighbour disputes and the loss of gardens.

Regulations have also been relaxed in other areas. For example, if someone owns a shop and wishes to convert it to a house, that is usually now a permitted development.There are examples in our area where this has happened both before the changes to the regulations (e.g. the launderette on Coldharbour Road) and since.The new relaxed regime further threatens neighbourhood shopping streets like ours and all those around the country.

The idea is that if we could get more development in all our neighbourhoods and increase the population that would make local shops and facilities more viable and closer to more people and therefore reduce the need for people to travel, especially by car. It is often summed up as ’20 minute neighbourhoods’, i.e. all you need day-by-day within easy walking distance (for most).

Bristol City Council are pushing 20 minute neighbourhoods by trying to raise housing densities across the city hence ‘densification’. Note also that the idea was mentioned by one of the team involved with the St. Christopher’s proposals as some sort of spurious justification for their attempt to put a quart of development into the pint pot of a highly constrained site.
​
So it is important to be aware of these pressures but to question where and how far densification should be applied. It may be appropriate for lower density neighbourhoods but should it be applied to areas where housing densities are high? Westbury Park is already a 20 minute neighbourhood – we have shops, restaurants, cafes, cinema, library, churches, schools all within a 20 minute walking distance. Do we need to be further densified.